Former Second House of the Aokis in Nasu 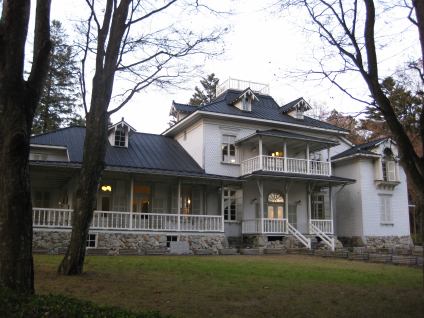 The Second House of Shuzo Aoki

This building was built in 1888 as a second house in Nasu by Shuzo Aoki who started Aoki Farm, was born in Yamaguchi prefecture and served as a Japanese Ambassador in Germany, foreign minister and was a viscount in Meiji Era. There was only the central two-story building at the beginning, and an extension which mostly made up the current form was built in 1909. It was called Aoki's house and familiar to local people.

It was donated to Tochigi prefecture in 1989, demolished and studied by the prefecture in 2006, moved about 50 meters in the south-east direction, restored and renovated in March 1998. It has been opened to the public as one of Michi no Eki (road side rest area), "Meijino Mori, Kuroiso" facilities.

There are a farm restaurant, ice cream shop and bakery, market in the road side rest area next to this house.

new review
Reviews on this place(0)